In my last post I mentioned my recent article on Harlequin artists. Here is the article, excluding the list of artists.

As part of Harlequin Enterprise’s 60th anniversary celebration in 2009 a curtain was slightly drawn back on the many artists that created the Harlequin covers. Heart of a Woman, an exhibit first seen in New York and then Las Vegas, highlighted the work of six artists with samples from many others. Some 150 original works of art were on display. The exhibit, and attendant publicity, was a rare acknowledgement of the mostly long-forgotten artists. Here I want to pull back the curtain a bit more.

Artists for United States paperbacks have received, thanks to Piet Schreuders (Paperbacks, U.S.A) and others (e.g., Paperback Parade, Paperback Quarterly, Illustration), a great deal of attention over the last 35 years. But, to my knowledge, there isn’t an accurate and complete list of artists for Harlequin and other early Canadian paperback publishers. By 1960 Harlequin had virtually completed the move to an all romance publisher. Over the next fifty-nine years the art has changed but not the genre. However, the art for the first 500 Harlequins (May 1949 to January 1960) is seen on westerns, mysteries, thrillers, science fiction, adventure, non-fiction and others, all in glorious midcentury paperback colour. I have found no evidence that Harlequin had an art director early in its history. Until mid-1957 the editorial office was in Toronto while the books were produced in Winnipeg. One of the owners, Jack Palmer, was the editor until his death in 1954 and may also have handled art director duties. As seen below nearly all the first 500 covers were done by Toronto artists. The art often did not reach the level of that on American paperbacks in the 1950s.

Harlequin did not acknowledge its artists. The art on 11 of the first 500 covers had been used on an earlier book. The remaining 489 books included seven covers with photographs and one with only text, leaving 481 books with original art. The work of at least 32 artists is seen on these books, some relatively well known, most forgotten and some anonymous. A surprising 304 (63%) covers are signed by 23 artists (22 men, one woman), three of whom are known to be alive in 2018. I have identified the likely artist on 62 of the unsigned covers, meaning 366 (76%) of the covers have identified art. On the remaining 115 books there are 14 covers with the unknown initials or unintelligible signatures of nine artists. 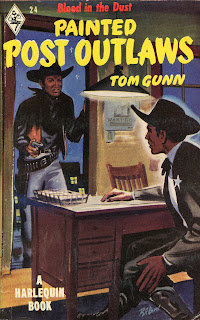 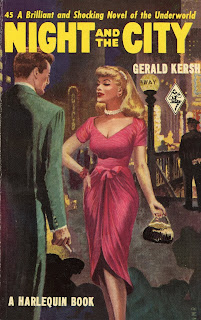 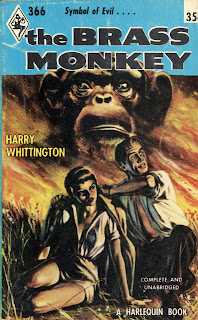 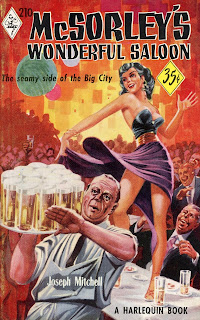