Two more Marx/Papo comparisons. Triceratops and Pterandon. Marx is right about the length of Triceratops. The Pterandon's wing length is a bit long - should be 18-20 ft. 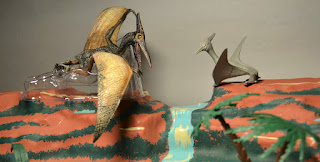 Another Marx/Papo comparison. This one is complicated. The Papo is an Apatosaurus. The Marx is a Brontosaurus. Same or different genus? Depends on whom you ask. A recent (2015) study argues strongly for different. You be the judge!

Marx got the length right but not the weight. Today's estimate is 17 tons - half of the 35 or more tons Marx has in its booklet. The largest suaropod genus known today is Argentinosaurus which is estimated to be between 100 and 130 feet and 55 to 100 tons. 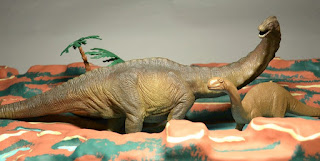 This Marx Tyrannosaurus rex is the earliest version, referred to as the pot-bellied T Rex. A later version from Marx had him/her slimmed down.

Marx was faithfully (within the manufacuring limitations) capturing the 1950s versions of these dinosaurs. By the 1970s a dinosaur study renaissance had begun and we have today's much changed version.

The booklet is correct about weight. Length now placed at 40ft and age now 68 to 66 MYA. 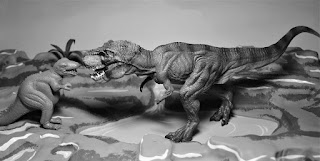 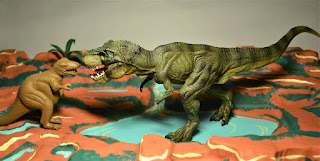 In my last post I introduced the Marx dinosaurs from the 1950s and 60s. The set I own is the earliest - Series 500 from 1957. It has the following Extinct Monsters:

So nine dinosaurs, two reptiles, two synapsids and one therapsid for a total of fourteen. The descriptions identify these as from the earliest molds. Later molds have subtle differences.

Here are two more comparisons with the Papo versions. 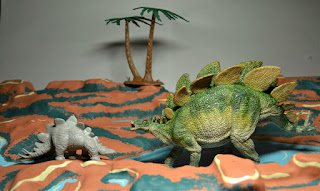 For a few posts I'll be talking about one of my other interests - toy Extinct Monsters (aka dinosaurs). Specifically the 1950s and 60s Marx sets. I've recently been photographing the Marx dinosaurs (although not just dinosaurs - more later) with my favourite recent models from French company Papo.

Here's a couple of examples along with the matching pages from the booklet that came with the earliest Marx sets. The landscape they're on is also from the Marx set.