Ten years ago I introduced the Junior Adventure Library from Toronto's Studio Publications. It is an obscure four issue paperback series targeted to kids published in 1952. Three of the titles are well known texts and/or authors. The fourth is different. I just found this uncommon book and learned that it is a collection of four stories.

The book is digest sized with 90 pages of text, including five illustrations. All artwork is unsigned.

Dawn Patrol by Thomson Burtis (1896-1971). First published in the June 1924 issue of American Boy. As far as I can tell this is the only book appearance.

The Man Who Went Down by Laurie York Erksine. The source for the story is unknown.

"I Am a Dog" Confessions of a Dachshund by Clark W. Grayson. I can find nothing about the author or story.

A 1955 Canadian Lung Association Christmas Seal stamp has been added to the front cover. 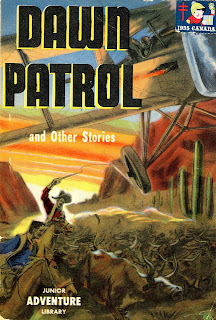 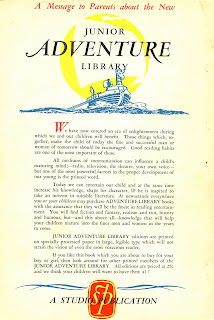 Studio Junior Adventure Library J2 back
Posted by bowdler at 09:05 No comments: