Frederick Niven is a little remembered Scots-Canadian author who shares some facts with the much better known Canadian author Stephen Leacock. Both were born outside of Canada, both died in 1944 and both have a literary award named after them. The Frederick Niven Literary Award was administered by the Scottish Centre of International PEN and given every three years for a novel by a Scot. I say "was" because I can find nothing to indicate that the award is still given. The Stephen Leacock Memorial Medal for Humour is given annually to the best book of humour written by a Canadian.

The first WC edition was one of the initial 50 published in 1942. A second edition was published in 1944 and then reprinted the next year. The NCL edition came 30 years later in 1974. This book demonstrates some of the sloppy work often seen in the NCL series. The copyright page states the book was originally published in 1942, not the correct 1935. The back cover notes 1935 as the "written" date, not the publishing date. The text is printed (poorly) from the Collins WC edition of 1944 rather than being reset.

The WC edition was discussed in an October 10, 1942 Globe & Mail story titled "White Circles". The article starts with "Canadian-made reprints of books of proven popularity mean a long step forward in local publishing" and the last paragraph says "there are plenty of other titles; new ones are being added fast, and copies are being absorbed by the public in very large quantities." The article is unsigned but likely W. A. Deacon. 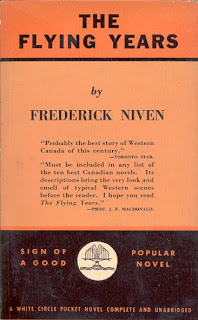 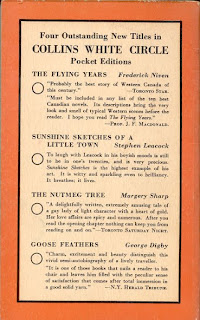 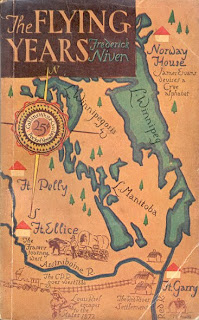 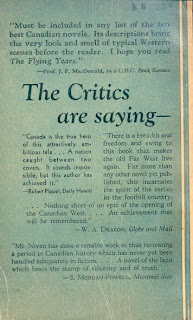 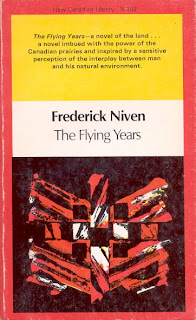 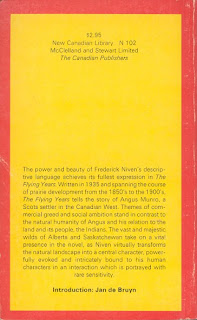 New Canadian Library 102 back cover
Posted by bowdler at 09:03