Among the three largest paperback publishers there was a clear hierarchy for the publishing quality of reprints. Harlequin Books was the best. Harlequin provided the year and month for first and subsequent printings. Wm. Collins Sons & Co. Canada Ltd was next. Collins, with one exception, never provided the publishing date for its White Circle first printings - just the copyright year which in most cases was the year the book was printed. For reprints the date was often but not always given. In some cases it is not clear which variant of a book is the first printing. Export Publishing Enterprises Ltd sits clearly at the bottom with reprints of their News Stand Library (NSL) imprint. Here we'll start to see examples of the vexed world of NSL reprints.

Thirteen of the first 32 books in the series had clearly marked reprints. Then only two in the next 124. It is difficult to believe that the first 32 books were so much more popular than the final 124. Export may have had trouble in the first months establishing adequate print runs. Or they just stopped marking reprints. It is a little suspicious that the final two books with marked reprints are so close together - 122 and 124. At any rate here is the first NSL reprint.

The first reprint is one of the first two unnumbered books in the series, Mark it With a Stone by George Victor Martin. The first printing is undated. The second printing states "First News Stand Library Edition May, 1948 | Second Printing, June, 1948" on the copyright page. The second printing is 8mm wider and has a red stripe down the right side of the front cover and left side of the back cover and a yellow overprinting of the blurb at the top of the front cover. On the back cover – “MARK IT WITH A STONE | GEORGE VICTOR MARTIN” and “Acclaimed … BARE” are in red vs. blue on the first printing. 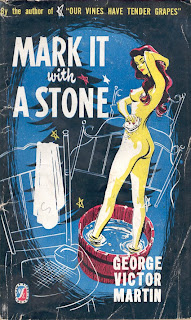 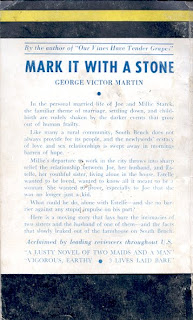 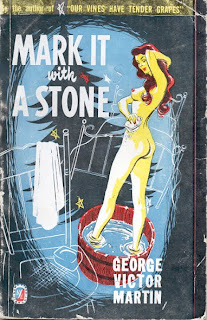 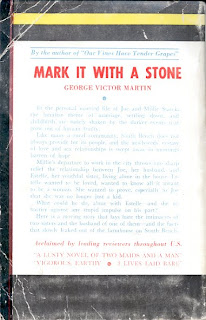 second printing back cover
Posted by bowdler at 09:04