P. K. Page, described as a Canadian literary icon (see obituary here), died earlier this month after an amazing career of more than seventy years. An anthology of Canadian poetry published 68 years ago has one of her poems - "For G. E. R.". See part way down right hand column. 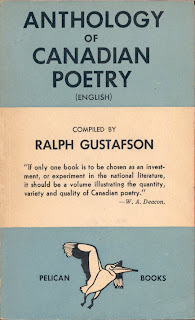 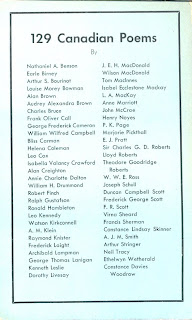 The Globe & Mail review by W. A. Deacon (June 6, 1942, p. 9) calls the book a "neat, small, cheap collection." He congratulates Ryerson Press on "an excellent piece of bookmaking" and notes that "[the president of] Collins plans to sell 50,000 copies during the next two years, which is the term for which he has leased copyright privileges." Note that he mentions Wm. Collins Sons & Co. Canada Ltd. rather than the publisher Penguin Books. Collins had been the agent in Canada for Penguin since the late 1930s but in this case was publishing the book in Canada. My copy has the following slip which dates from a few years later when Collins was no longer agent. A small company in St. Lambert Quebec had taken over. 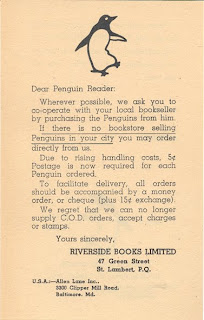