Paperback Originals (PBOs) were uncommon in the world of mass market publishing until the 1950s. Here we'll start to look at the three largest Canadian publishers and their PBOs. Harlequin Books and Wm. Collins Sons & Co. Canada Ltd. were typical reprint publishers. From 1949 to 1959 after which they published only romances Harlequin issued 481 titles, 19 (4.0%) of which were PBOs. Collins had 429 titles during its 10 year run of the White Circle imprint. Only 10 (2.3%) were PBOs.

Export is a different story. Of Export's 165 titles, 55 (33.3%) were PBOs. There were no PBOs for the first year after Export started the News Stand Library imprint up to #52, then 32 in the next 43 books. I suspect this shift resulted from Export finding it cheaper and perhaps easier to deal with Canadian authors willing/needing to sell a novel for $400 with no royalties than contracting for reprint rights with American publishers. Based on the way they handled the author below Export did not spend a lot of time getting a book out the door.

Here is one PBO from Export - The Pillar of Fire by H. Gordon Green. Green wrote for newspapers and magazines and worked many years at the Family Herald, first as fiction editor then as editor, ending his career as a teacher. In a letter many years later Green complained about his treatment by Export:

"[I] agreed to sell [to Export] the mss’s condensation [sic] rights for $400.00, and I was horrified when the paperback came out to see how the original had been murdered. Only about half of the original was used [and] I look back on my dealings with them with no pleasant memories."

Other than the recent edition of Montreal Confidential this is the only Export PBO to be honoured with a new edition. In 1953 Brunswick Press of Fredericton published an unabridged trade paperback version (some 105% larger) under the even more pretentious title The Praying Mantis. This edition does not mention the Export edition and notes that the book was “An Avery Hopwood Award Winner.” The Export edition also states that The Pillar of Fire is the “Winner of the HOPWOOD MAJOR AWARD for Fiction.” This award is part of The Avery Hopwood and Jule Hopwood Awards Program administered by the University of Michigan. Students at the University are eligible for one of a number of awards. The manuscripts they submit are not necessarily published. Export, by abridging more that half of the book, did not publish the manuscript that won the award, the only award connected with an Export book. 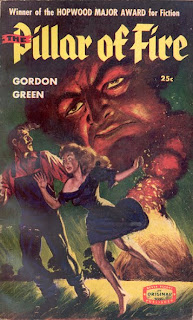 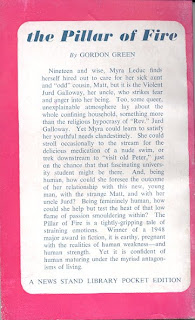 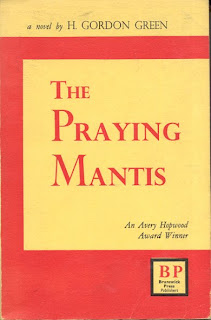