This past December 6 was the 94th anniversary of the Halifax Explosion. Hugh MacLennan's 1941 novel about the explosion was published by New York's Duell, Sloan & Pearce. The Canadian edition was published in hardcover by Toronto's Wm. Collins Sons & Co. Canada Ltd in 1941 and in paperback in 1943 and 1952. The 1952 version has an illustration with one identifiable Halifax landmark, the Town Clock on Citadel Hill, seen through the window at middle right.

But there is a problem with the illustration which shows the shipbuilder's office at least on the same level as the top of the clock if not higher. As the photographs below show this wouldn't have been possible since the only spot on higher ground than the clock is Fort George behind it on Citadel Hill. 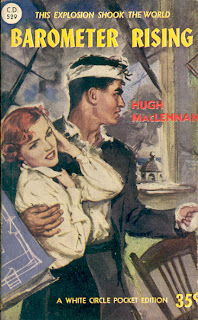 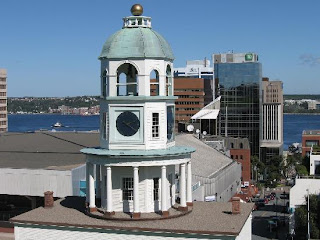 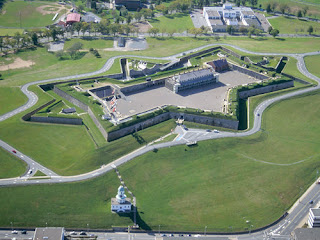 Fort George with Town Clock
Posted by bowdler at 09:05