Harlequin Books, for the most part, clearly noted reprints. But sometimes there are variants of a title that are confusing.

General Duty Nurse by Lucy Agnes Hancock is an example of clearly marked reprints. The first printing is June 1953, the second February 1955 and the third May 1956. The printings are noted on the copyright page. There are minor differences between the printings. The first printing has the title in red on the spine, house ads on pages 191 and 192 and bulks to 16mm. The second printing has a yellow title, blank pages 191 and 192 and bulks to 16mm. The third printing is the same as the second but bulks to 11mm. All have six 32 page gatherings. The images below are from the first printing. 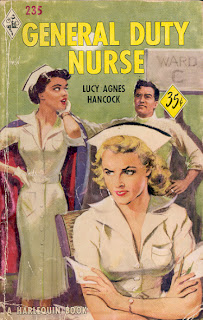 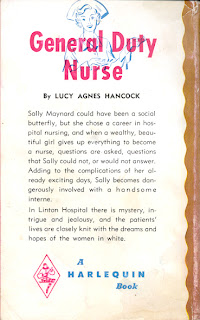 Harlequin 235 back
Anna by Anneke De Lange is an example of unidentified variants. The three variants are dated June 1952 and bulk to 17mm with seven 32 page gatherings. There are no textual differences. The difference between variants one and two is slightly darker red in the covers and the absence of a colour background for the title on the back cover. The third variant has a darker red cover with a greener dress. The phrase "A HARLEQUIN Book" on the back cover is shorter than the other variants and "HARLEQUIN" is in a different font. The quality of the printing is worse than the first two variants. Variant 3 is very likely a later printing. It isn't possible to establish priority for first two variants. 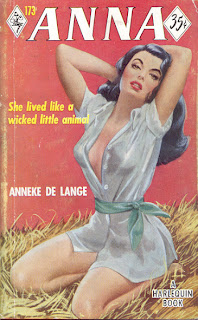 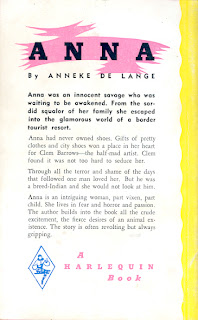 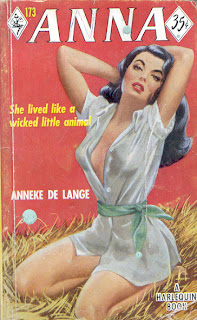 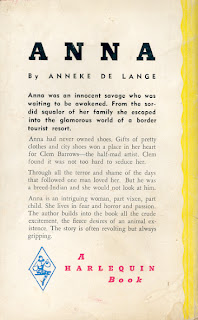 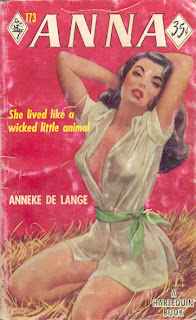 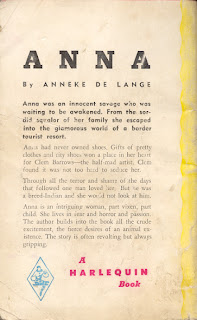