Harlequin and the RCMP - Part I

The North-West Mounted Police was a paramilitary police force established in 1873 to maintain law and order, and to be a visible symbol of Canadian sovereignty, in the newly acquired North-West Territories (including present-day Alberta and Saskatchewan). "Royal" was added to its name in 1904, and in 1920 the RNWMP merged with the DOMINION POLICE to form the ROYAL CANADIAN MOUNTED POLICE.

Harlequin Books loved the RCMP. Eleven of the 497 books Harlequin published between 1949 and 1959 were about the RCMP. Plus one more in 1960. With three of the books reprints there were nine titles in total. Two of the early titles are shown here. The last two titles are Steele of the Royal Mounted (Indianapolis: Bobbs-Merrill, 1911 as Philip Steele of the Royal Northwest Mounted Police) and The Living Legend (Boston: Little, Brown, 1957). The former book is disguised in time and genre with a change in title, a classic romance cover and 1950s era styling. 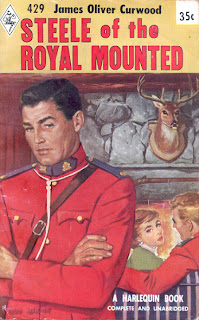 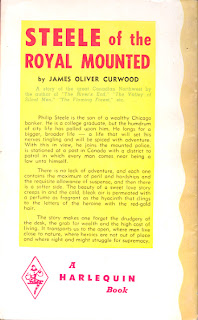 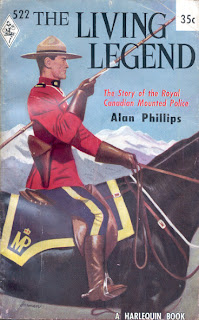 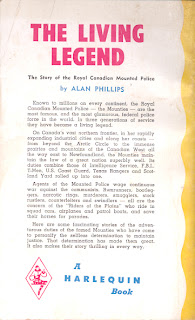