Firsts The Book Collectors Magazine has been in business for 20 years. Only once has a vintage Canadian paperback been mentioned in an article. The June 1996 Firsts' cover article is "Collecting Mickey Spillane". Along with the American paperbacks of Spillane's first seven novels, the White Circle edition of I, the Jury is noted in the article as well as the accompanying checklist of editions. Normally only the first editions of books (usually hardcover) are discussed in Firsts as paperback reprints have no collecting value for most book collectors. But the significance of the hugely successful Spillane paperback reprints make them collectible. To quote the article -

"the publishing pattern [of the first six books] was basically the same as for I, the Jury: small first printings (about 7,500 each) and a few reprints followed by multiple printings in paperback and huge sales. Signet issued a 2.5 million copy reprint of The Big Kill [the fifth book], at the time the largest printing in paperback history."

The price for the White Circle edition in the checklist is $100 - $250. This is still a good price range. The book is not rare. There are 13 copies for sale on ABE, seven of the first printing ranging in price from $15 to two copies at $300. The condition of the $300 copies do not support that price. The $15 is very fair for a poor but complete copy.

Wm. Collins Sons & Co. Canada Ltd published its White Circle imprint from 1942 until 1952. In late 1948 I, the Jury was published as CD384. A second printing followed in 1949. Note that the cover colours are slightly different on the reprint. The reprint is clearly marked as such on the copyright page so one doesn't need to compare the cover colours to establish the printing. There is a dealer on line who notes a third printing which doesn't exist. Unfortunately this has found its way into Holroyd's Paperback Prices and Checklist. Even the Firsts article talks about "later printings." 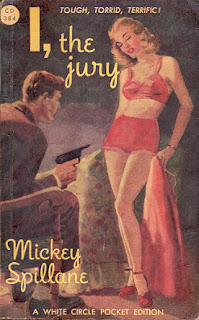 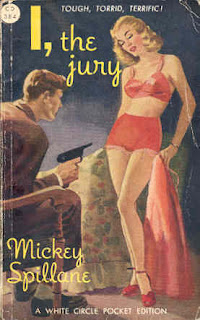