After the war a number of Canadian companies published cheaply produced paperbacks for sale in the UK. One such publisher was Popular Publications, Inc. with Toronto and London addresses. I know of two books Popular published in 1947 and possibly two more. The two I've seen are The Monster of the Lagoon by George Worts and The Immortals by Ralph Milne Farley. Both are the first book appearances of stories originally serialized in Argosy All-Story Weekly in 1934 and 1935.
Each book is an over sized digest measuring 6 1/4 x 8 1/2 inches. 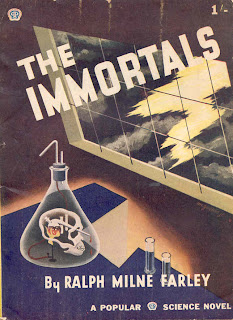 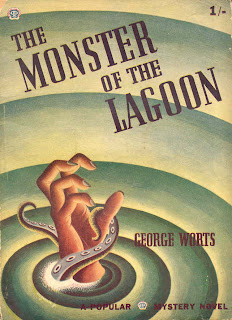 The artwork is signed "mcguckin jr.". This is likely an artist named Malcolm Leland McGuckin Jr. The two books that may exist are advertised as Diamonds of Death by Borden Chase and A Grave Must be Deep by Theodore Roscoe. Both stories were also serialized in Argosy All-Star Weekly in the 1930s.