In early 1942 Wm. Collins Sons & Co. Canada Ltd. placed advertisements for their new line of White Circle paperbacks. The ad below is from the March 15, 1942 issue of the Canadian trade magazine "Bookseller and Stationer". The ad notes that "because of the enormous demand and impossiblity of obtaining regular supplies from Great Britain [because of the war], White Circle Pocket Novels are now printed in Canada". Booksellers were told that "your turnover and margin of profit justify mass display and quantity purchasing." 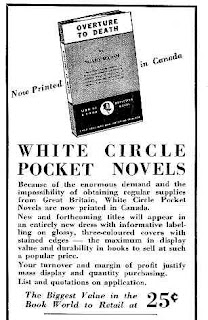 The first book in the series was King's Enemies by J. M. Walsh. The last, The Devil Man by Edgar Wallace, was published in early 1952 by which time 459 books had been issued. Unlike the two other large Canadian paperback publishers in the 1940s, Harlequin and Export Publishing, Wm. Collins Canada was owned by a hardcover publisher - the Scottish-British firm Wm. Collins Sons & Co. Therefore most of the White Circles were paperback editions of books published by Wm. Collins in the U.K.
During the ten years they were published the look and content of the White Circles changed. Further posts will discuss these changes. 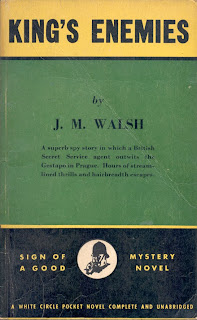 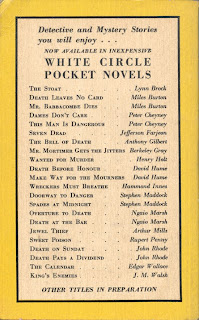