Between 1942 and 1952 Wm. Collins Canada published 459 of their White Circle paperback imprint. Some of these were new editions of books published earlier in the series leaving 429 published titles. By far the best known of the 429 White Circles is CD384, Mickey Spillane's I, the Jury. The artist is unknown. 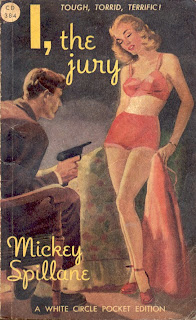 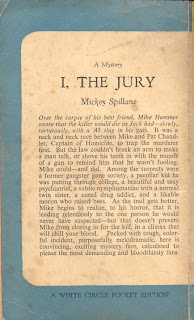 This is the first paperback edition of Spillane's first and best known book, published in 1947. The White Circle edition was published in late 1948 and precedes the American edition, New American Library's (NAL) Signet #699, by a couple of months. The NAL edition is famous for the impact it had on publishing. The hardcover had sold a few thousands of copies but the NAL paperback sold 2,000,000 in two years. NAL then went on to publish in paperback the rest of Spillane's novels in the early fifties with 17,000,000 in total sold by 1953 (figures from Kenneth Davis, Two-Bit Culture (Boston: Houghton Mifflin, 1984), p. 180.) These figures shocked the cultural critics of the day and amazed the publishers.
"But the law couldn't break an arm, or shove his teeth in with the muzzle of a gun to remind him that he wasn't fooling. Mike could - and did. Among the suspects were a former gangster gone society, a peculiar kid he was putting through college, a beautiful and sexy psychiatrist, a subtle nymphomaniac with a normal twin sister, a cured drug addict, and a likable moron who raised bees."
The White Circle was reprinted in 1949 and therefore sold a bit better than most of the titles. Still sales were likely no more than 40,000. It was the only Spillane White Circle. The Canadian market thereafter was covered by Canadian editions of NAL Signets. The sixth edition from the late 1950s is below. Note that sales are now 28,000,000. The artist is Barye Phillips. 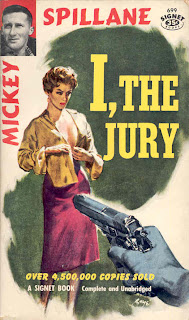 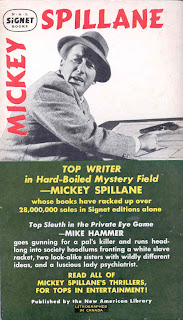