Harlequin Books published 497 books between 1949 and 1959. After 1959 only ten Harlequins were non romance. There were 20 reprints leaving 477 titles representing 252 authors. Taking into account pseudonyms four had more than 9 titles with James Hadley Chase at the top with 24. Here we'll look at his first book as well as the sequel.

Chase's most famous (and infamous) novel was his first of over 80 - No Orchids for Miss Blandish published in 1939 by Jarrolds of London. In the next 70 years the book was retitled, revised, bowdlerized and censored by publishers and modified by the author to produce at least five versions. It also has been filmed twice - a low budget British in 1948 and under the title The Grissom Gang in 1971, directed by Robert Aldrich.

The Harlequin edition is one of the modified ones originally published by Jarrolds in 1942. There is a Harlequin reprint with April and June 1951 dates and one with April, May and June dates. I don't know if there is a printing with April and May dates only.

The sequel is The Flesh of the Orchid, first published in 1948. The Harlequin edition was reprinted in June 1951. 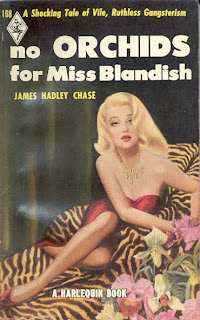 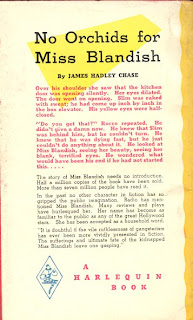 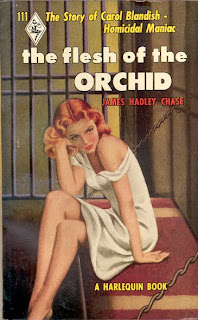 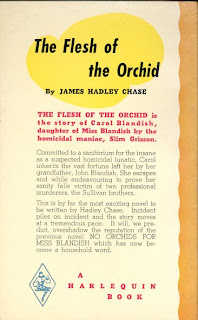