In 2009, as one of its 60th anniversary efforts, Harlequin Enterprises published new editions of six of its earliest books. Here we'll look at one of them - Pardon My Body by Dale Bogard.

Pardon My Body was first published in December 1951. It is one of 24 (of a total 477 titles) paperback originals Harlequin published from 1949 to 1959. Bogard is a pseudonym for Douglas Stallard Enefer (1906-1987), an Englishman who wrote television scripts and novels.

The title was reprinted in November 1952. The 2009 version is a new edition, not a reprint, as the text has been revised. Below are front and back covers for the three books. The early reprint's front cover has an orange rather than red dress with the other colours a bit off. The 2009 edition's front cover has lost much of the detail of the original, especially evident in the hair and dress. The image has been shifted with the bottom of the garter belt cut off and "A HARLEQUIN EDITION" moved up and to the right. The back cover's blurb is repeated in the 2009 edition but, as with the spine, the design is different.

The 2009 edition has a introduction by the publisher that says "it is such fun to be able to present these works with their original text...". The editor should have talked to her publisher because in a blog last year she admitted to bowdlerizing the new editions - removing or modifying what the modern day Harlequin considered objectionable. The first changes in the new edition of Pardon My Body are:

- in the second paragraph the sentence "Or maybe I just don't go for amoral women nursing careers instead of babies." is removed.

No point in going any further (farther?). 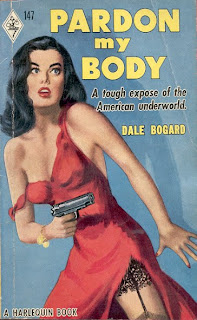 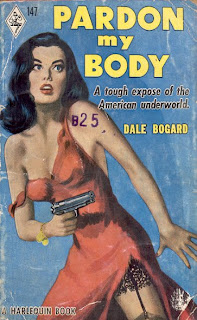 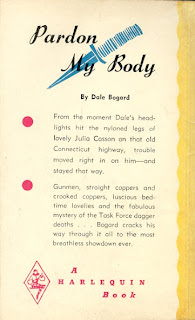 Harlequin 147 back both printings 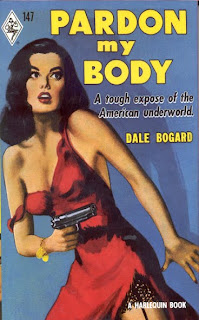 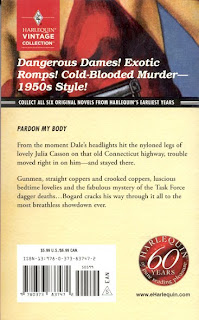