The Harlequin book with the most printings is Thomas P. Kelley's The Black Donnellys. There are 15 printings of two editions between April 1954 and April 1968. It must have been a very profitable book because the last printing was a full five years after Harlequin's complete switch to romance. The book is not in print but there was an edition as recent as 1994, not from Harlequin of course.

It's the usual cliched mix of fiction and non fiction from Kelley. Why so popular? The story still attracts attention - see the "official" web site and here in Lucan, Ontario where it happened.

The book was reset between the second and third printings. Technically this is a new edition, although the text has not changed. The front cover remained the same with only the price rising from 35 cents to 40 in the early 1960s, then 45 and finally 50 cents. The back cover changed only once. The yellow background is a cross on all the printings except the second in August 1954 where it is a large grave marker. 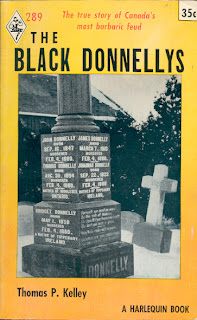 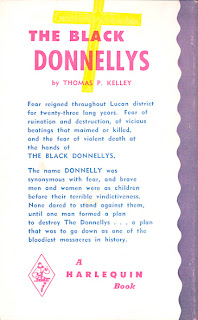 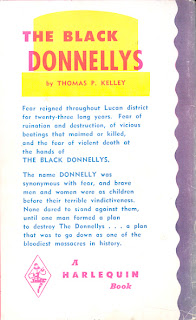 Harlequin 289 second printing back﻿
Posted by bowdler at 21:05