Who is a Canadian author? Should be a simple question to answer - someone with Canadian citizenship. But what if they've lived out of Canada for the last 40 years and write novels about Australia? Or Canada? Or lives in Canada and writes about the country they were born in, Vietnam? Or not a Canadian citizen but lives in Canada and writes about depression era Saskatchewan? Or visits Canada for six months then writes about the immigrant experience in Toronto? Does it matter where the book is published? Does any of this matter? Yes if you want to win a Canadian writing award. I'll look at these in another post.

How many Canadian authors were published by the Canadian mass market paperback publishers of the 40s and 50s? Wm. Collins Sons & Co. Canada Ltd's White Circle imprint published 143 authors, 16 of whom were Canadian. No doubts here - all Canadians living in Canada writing about Canadian subjects. Number of titles was 23, of a total 429. Nine were paperback originals. Here is the list:

Here is an author who has not yet been seen in this blog - Earle Birney (1904-1995). His WC book, Turvey (Toronto: McClelland & Stewart, 1949), won the fourth Stephen Leacock Memorial Medal for Humour in 1950.  Below is the WC edition plus the New Canadian Library edition. The NCL imprint from McClelland & Stewart publishes only Canadian authors. 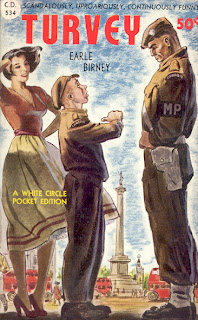 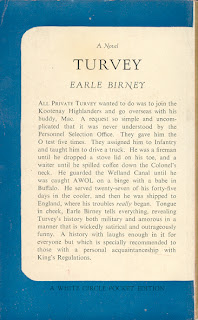 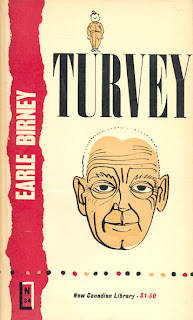 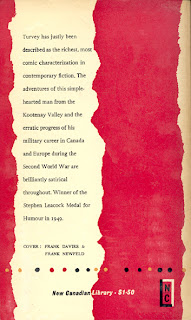