Very few of the offerings from Harlequin Books published from 1949 to 1959 were ever published again in Canada. One exception is the paperback original Mind your Manners by Claire Wallace, edited by Joy Brown. The first Harlequin printing is November 1953, reprinted January 1954. This is the only Harlequin that is not numbered on the cover. The number is at left bottom of the first page of each leaf.

In 1967 Winnipeg's Greywood Publishing published a renamed "revised and enlarged" edition, including a new travel section. There is no mention of the Harlequin version. Greywood's edition was reprinted in 1968 and 1970. But the 1970 printing drops any mention of Joy Brown (now Carroll) from the covers and title page. Joy Carroll was the wife of Jock Carroll (Jock and Joy - rock and roll). More about her in another post.

The 1967 edition has an introduction which acknowledges "there is a greater informality in life today" but the etiquette of the day as described still feels dated for 1967. For example a married woman is only addressed by her married name (i.e. Mrs. George Manners.) But, and this I had never heard before, a woman in a hospital (!) can be addressed as Mrs. Georgina Manners. This is the only (!) time it is acceptable to address a married woman in such a manner. This last rule has been added to the 1967 edition. 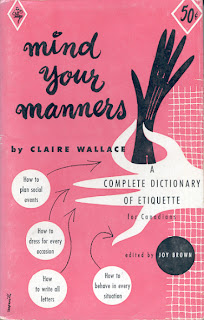 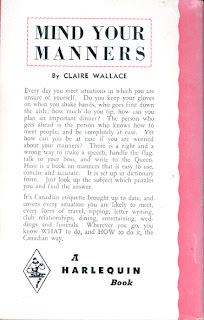 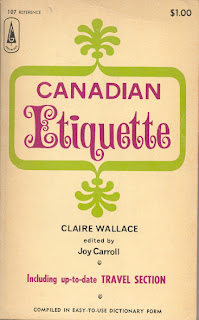 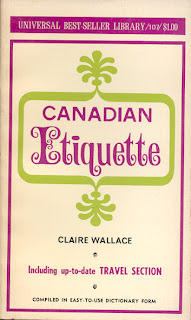