"Al Palmer, with the now-defunct Herald, campaigned intrepidly for our right to buy margarine over the counter [italics in original] - margarine once as illicit in Quebec province as marijuana is today. Al Palmer, who was, in his time, the Dr. Tim Leary of artificial foods."


Al Palmer was a well known police reporter and commentator for Montreal newspapers who was 36 when the first of his two books for Export Publishing Enterprises Inc. was published in 1949. This was the novel Sugar-puss on Dorchester Street. In 1950 Export published his non-fiction work Montreal Confidential as News Stand Library (NSL) 134.

Sugar-puss is a thinly veiled autobiography where Palmer is Jimmy Holden "a reporter [for The Chronicle] who would rather buy clothes than eat - and frequently did". Sugar-puss is "Gisele Lepine - fresh as the cool clean air of her Laurentian village and eager with the realization of a five-year dream - Montreal."

Sugar-puss was published in two editions - as NSL 84 in November 1949 and NSL 20A in February 1950. The first edition was for sale in Canada, the second in the US. There were two different covers, the first by D. Rickard, the second by Sid Dyke. In addition the US edition was published with a dust-jacket by an unknown artist. 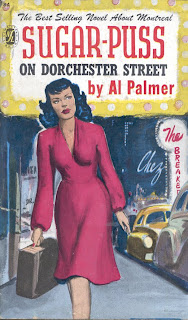 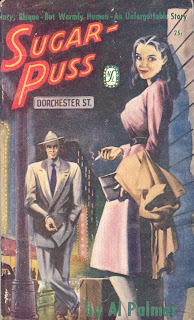 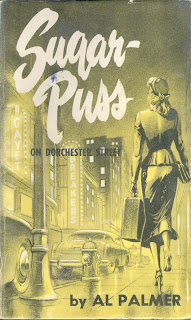 NSL 20A with dust jacket 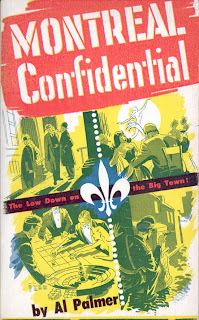