Here are two Canadian paperbacks from the late 1940s or early 1950s that are pirated versions of American books.

The first Canadian pirate is God's Little Acre by Erskine Caldwell - stolen from the New American Library (NAL) Signet edition first published by NAL's predecessor Penguin US. The pirate is published by Anglo-American Publishing Co. Limited. There is no publisher address but the book states "Printed in Canada 1948". All the publisher identifiers on the original cover have been removed but, except for the title and copyright pages, the book is a duplicate of the NAL edition. 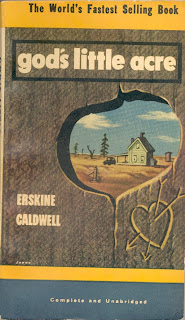 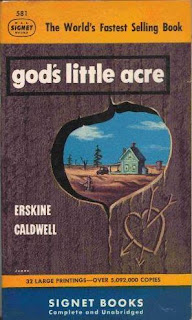 The second pirate is not so obvious. A new title and cover help disguise White Heat by Joan Sherman (pseudonym of Peggy Gaddis). The legitimate edition was published as Lulie (Handi-Book Romance 91) by Quinn Publishing Company, Inc. of New York in 1949. This edition has four pages with title, copyright etc. and then text from page 5 to 122. The pirated edition, referred to as Bizarre Books No. 1, has no preliminary pages and starts with the same page 5 and ends on the same page 122. The title/copyright/publisher information is on the inside front cover where there is a line that says "Restyled into Another Sell-Out Edition" for the publisher, The Trade-Mark Pocket Library at 28-20 Wellington St. West in Toronto. Note the two quotes from non-existent newspapers/magazines - "Fleshpots and Sinners..." from the London Literary Chronicle (!). The cover is in the running for the "ugliest Canadian paperback cover of all time".
The pirate's dimensions are smaller because the pages of the Quinn edition have been trimmed. Clearly the cover and first four pages of the Quinn edition have been removed, the pages trimmed and the White Heat cover glued on. 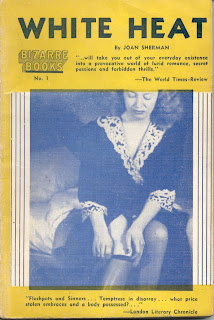 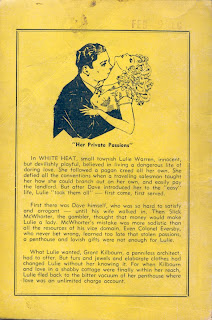 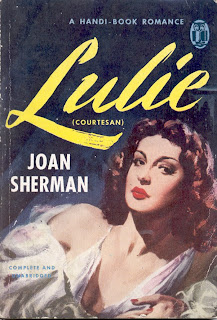