The popularity of westerns have waxed and waned but it seems there will always be room on the paperback display for at least a few westerns. Even Harlequin has a western themed romance series. The three large Canadian paperback publishers in the 1940s and early 50s had a number of western titles. Here we'll look at a sample of them.

Wm. Collins Sons & Co. Canada Ltd. published 43 western titles, 10% of the total 429. All were reprints. As discussed in an earlier post about White Circle authors, Charles Horace Snow was responsible for 31 of the titles under four pseudonyms. The other authors were Tex Curran (3 titles), Frank Robertson (2) and six with one title each. The distribution of the westerns is interesting. During the WC imprint's first five years (1942-1946) eight were published. The next five years (1947-1951 plus a few months into 1952) saw 35 published. Here I offer three from that first five year period. All are 1944 and the artist is Margaret Paull. 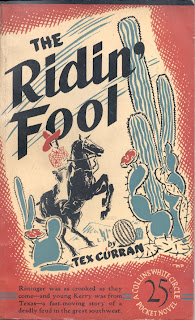 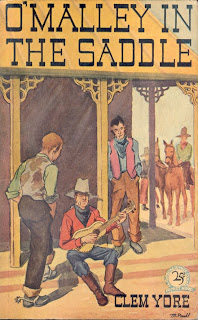 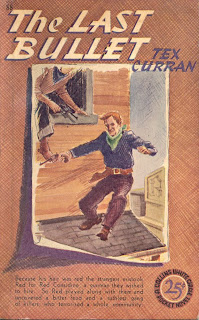 White Circle 88
Export Publishing Enterprises Ltd. had 10 westerns, 6% of a total of 165 titles. All but one were reprints. Another interesting distribution - two in the fall of 1948 and then seven in a three month period in 1950. Paul Evan Lehman and William Hopson had two titles each with five single title authors. Here are the two earliest from 1948 with an anonymous artist responsible for both covers. 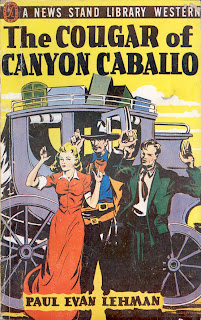 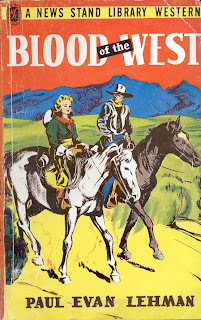 News Stand Library 12
The third publisher was Harlequin who published 73 westerns, 17% of a total of 426 titles through 1958 when the last western was published. All were reprints. Again an interesting distribution. The first five years (1949-1953) saw 56 westerns published, 21.5% of all titles. During the next five years there were 17 published, 8% of the total. The peak year was 1951 with 31%. There were a number of authors which I'll talk about in another post. The first four westerns were by Charles Horace Snow under his real name. From 1949 here are two of the first four by Snow. The artwork is unsigned. 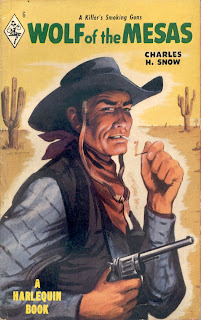 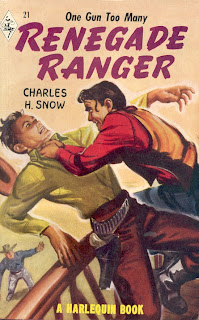